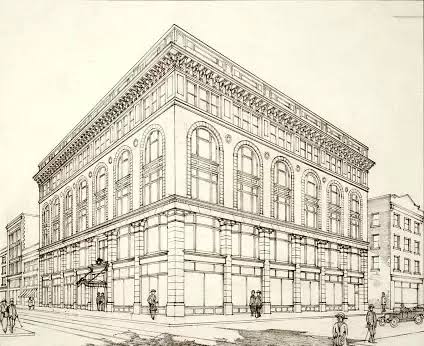 It is an approximate representation on a flat surface of an image as it is perceived by the eye. The key concepts here are:

Perspective is the view from a particular fixed viewpoint.
Horizontal and vertical edges in the object are represented by horizontals and verticals in the drawing.
Lines leading away into the distance appear to converge at a vanishing point.
All horizontals converge to a point on the horizon, which is a horizontal line at eye level.
Verticals converge to a point either above or below the horizon.
The basic categorization of artificial perspective is by the number of vanishing points:

In this Course you will learn

Three-point perspective gives a casual, photographic snapshot effect. In professional architectural photography, conversely, a view camera or a perspective control lens is used to eliminate the third vanishing point, so that all the verticals are vertical on the photograph, as with the perspective convention. This can also be done by digital manipulation of a photograph taken with a standard lens.

Aerial perspective is a technique in painting, for indicating distance by approximating the effect of the atmosphere on distant objects. In daylight, as an ordinary object gets further from the eye, its contrast with the background is reduced, its colour saturation is reduced, and its colour becomes more blue. Not to be confused with aerial view or bird’s eye view, which is the view as seen (or imagined) from a high vantage point. In J M Gandy’s perspective of the Bank of England (see illustration at the beginning of this article), Gandy portrayed the building as a picturesque ruin in order to show the internal plan arrangement, a precursor of the cutaway view.[11]

A montage image is produced by superimposing a perspective image of a building on to a photographic background. Care is needed to record the position from which the photograph was taken, and to generate the perspective using the same viewpoint. This technique is popular in computer visualisation, where the building can be photorealistically rendered, and the final image is intended to be almost indistinguishable from a photograph.

Important Notes:
• Student will start the course upon availability.
• You must activate your course at least 1 month prior.
• Special timings are not available.
• Private courses are not available.
• The course is taught offline.
• Students will receive a certificate upon completing the course.
• For more information please call 01030710031 or send your questions to info@thekingsacademy.info